In sub-Saharan Africa, timber has always been used, traditionally, for roofing (flat beams and rafters made from rough timber and branches, supporting laths covered in earth); such roofs are supported by adobe / mud walls, incorporating load-bearing timber posts.

Population growth in recent times, together with increasing desertification and regression of forested areas, means that these traditional building techniques are no longer feasible..

People in rural areas now have to resort to buying sheet metal (corrugated Fe) and sawn timber beams and rafters for roof-building. These imported building materials, with their deplorable thermal, acoustic, and aesthetic properties, are often beyond the means of many people. They have to be paid for in cash, often a problem for families living outside any formal economic system. Finding the necessary funds becomes a major drain on family resources, and does nothing to promote sustainable development.

An ancient architectural technique, traditionally used in Sudan and central Asia, but until now unknown in West Africa, can provide the answer to the current problems of house-building in the Sahel. This technique - “la Voute Nubienne” or VN - makes it possible to build houses with vaulted roofs (on top of which a traditional flat roof terrace can be constructed) using basic, readily available local materials and simple, easily learnt, procedures. 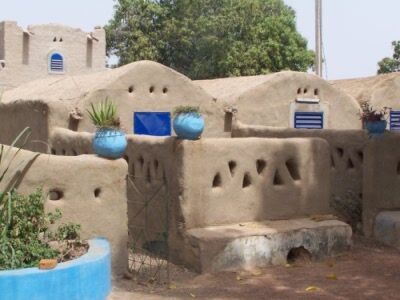 What’s so special about the VN technique? - the only raw material used is earth, for making both mortar, and mud bricks dried in the sun - timber shuttering is not required to support the vault during construction - the traditional methods have been simplified, and adapted to provide protection during the short but heavy rainy seasons of sub-Saharan Africa.

The major cost element in using the VN method is labour, thus keeping cash in the local economy; the raw materials are locally available and ecologically sound.

The VN technique provides people with a feasible alternative to building with imported sheet roofing materials and timber. It is essential that the technique becomes more widely adopted, and this is the declared aim of the “Voute Vubienne” association, through its programme Earth roofs in the Sahel.

The Association la Voute Nubienne (AVN) trains people in the Sahel to construct vaulted, mud-brick roofs, which are more affordable, healthy, and sustainable than typical alternative construction practices. In addition to training, AVN support VN masons in establishing small businesses to promote local economic development, and in bringing the benefits of VN construction techniques to families and individuals in need.

AVN's key objective is thus to promote the use of the VN technique as a valid alternative to other building methods in Burkina Faso and neighbouring countries of the Sahel. The Association’s role is a “pump-priming” one: to get the technique adopted in a particular zone, then to gradually withdraw and move on to other suitable areas.

Through its Program "Earth roofs in the Sahel", the AVN:

- organises the selection and training of future VN builders - coordinates, and provides quality control of, VN building sites - helps trained builders to become independent entrepreneurs - publicises the VN technique, to create a clientele for VN entrepreneurs - establishes partnerships with other organisations (NGO’s, public and private bodies...) to help replicate and scale up the programme in new zones and countries of the Sahel.

The AVN’s global fund-raising and networking activities are already having a significant impact on the development of the Earth roofs in the Sahel programme and in the creation and exponential growth of a real VN market.

The AVN does not itself finance the construction of VN buildings: its role is to create and nurture a socio-economic environment in which a self-sustaining VN market can develop.