This article is a stub. You can help Green Wiki by expanding it. 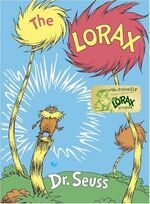 The Lorax is a children's book written by Dr. Seuss and first published in 1972. It chronicles the plight of the environment and the Lorax, who speaks for the trees against the greedy Once-ler. As in most Dr. Seuss works, most of the creatures mentioned are original to the book.

The book is commonly recognized as a fable concerning the danger corporate greed poses to nature, using the literary element of personification to give life to industry as the Once-ler (whose face is never shown in any of the story's illustrations or in the television special) and the environment as The Lorax.

A young boy residing in a polluted, grim world visits a strange creature called the Once-ler who lives in such seclusion that he never appears in full and only his limbs are shown. He pays the Once-ler fifteen cents, a nail, and the shell of a great-great-great grandfather snail to explain why the world is in such a run-down state. The Once-ler explains to the boy that he arrived in a beautiful, cheerful world containing happy, playful fauna that spent their days romping around blissfully among "Truffula trees." The Once-ler begins to cut down the truffula trees, thinking they will help him craft "Thneeds," his invention that he thinks everyone will need.

The Lorax, a small orange creature, appears from the stump of a truffula tree. He "speaks for the trees, for the trees have no tongues" and warns the Once-ler of the consequences of cutting down the truffula trees, but the Once-ler ignores him. Soon the once beautiful land becomes polluted and the fauna flee to find more hospitable habitats. Eventually the final Truffula tree is cut down, and without Truffulas the Once-ler cannot make any more Thneeds. This leads to the closure of Once-ler's factory and the disappearance of the Lorax. The Once-ler lingers on in his crumbling residence, living in seclusion and remorse, while pondering over a message the Lorax left behind: a stone slab etched with the word "Unless". The Once-ler now realizes that the Lorax means that unless someone cares, the situation will not improve. The book then returns to the present, ending on an ambiguous yet optimistic note where the Once-ler gives the boy the last Truffula seed and encourages him to plant it so that Truffula trees can return as well as the fauna, and so would the Lorax.

In a retrospective critique written in the journal Nature upon the 40th anniversary of the book's publication, Emma Marris described the Lorax character as a "parody of a misanthropic ecologist". She called the book "gloomy" and doubted it was good for young children. Nevertheless, she praised the book overall, and especially Seuss for understanding "the limits of gloom and doom" environmentalism.[1]

In 1988, a small school district in California kept the book on a reading list for second graders, though some in the town claimed the book was unfair to the logging industry.[2] Terri Birkett, a member of a family-owned hardwood flooring factory, authored The Truax,[3] offering a logging-friendly perspective to an anthropomorphic tree known as the Guardbark. This book was published by NOFMA, National Oak Flooring Manufacturers' Association. Just as in The Lorax, the book consists of a disagreement between two people. The logging industry representative states that they have efficiency and re-seeding efforts. The Guardbark, a personification of the environmentalist movement much as the Once-ler is for big business, refuses to listen and lashes out. But in the end, he is convinced by the logger's arguments. However, this story was criticized for what were viewed as skewed arguments and clear self interest, particularly a "casual attitude toward endangered species" that answered the Guardbark's concern for them. In addition, the book's approach as a more blatant argument, rather than one worked into a storyline, was also noted.[4][5]

The line "I hear things are just as bad up in Lake Erie" was removed more than fourteen years after the story was published after two research associates from the Ohio Sea Grant Program wrote to Seuss about the clean-up of Lake Erie.[6] The line remains in the home video releases of the television special.

Template:Rellink The book was adapted as an animated musical television special produced by DePatie-Freleng Enterprises, directed by Hawley Pratt and starring the voices of Eddie Albert and Bob Holt. It was first aired by CBS on February 15, 1972. The line about Lake Erie was spoken by one of the Humming-Fish as they marched out of the river at the foot of the Once-ler's factory. It remains in DVD releases of the show, even though the line was later removed from the book. The special also features more of an in-depth look at the problems, including the Once-ler arguing with himself about what he is doing, and at one point asking the Lorax if shutting down his factory (and putting hundreds of people out of a job) is really the answer. Many of the Lorax's arguments seem to be focused on how "progress progresses too fast", in a sense arguing that things might've been better if the Once-Ler had come to a balance with the forest and slowed down production of the Thneeds. An abridged version of the special is used in the 1994 TV movie In Search of Dr. Seuss with Kathy Najimy's reporter character hearing the Once-ler's story.

Template:Rellink On March 2, 2012, Universal Studios and Illumination Entertainment released a 3-D CGI film loosely based upon the book. The release coincided with the 108th birthday of Seuss, who died at 87 in 1991. The cast includes Danny DeVito as the Lorax, Zac Efron as Ted, Ed Helms as the Once-ler, Rob Riggle as new villain O'Hare, and Betty White as Grammy Norma, Ted's grandmother. Taylor Swift has also been cast as Audrey, Ted's romantic interest. The film debuted in the number one spot at the box office, making $70 million. 2 weeks later, this movie gained a total worldwide sale for the big-screen adaptation of Seuss’ 1971 children’s book now standing at US$158.4 million.[8] However, the film received mixed reviews.